I am currently reading a book by Nir Avieli, who is an academic at Ben Gurion University in Israel.  The book is called Rice Talks (2012, Indiana University Press) and is about eating culture, and particularly rice as part of that culture, in Vietnam. It is an interesting book from the perspective of learning about how people in a particular place eat, though there are some generalisations about Chinese foodways, used within the book to  provide context, that just don’t resonate.

The book includes a brief history of rice processing, which explains the notion of polishing.  Rice as it grows has two husks: an outer, inedible husk that is easy to remove and inner husk type layers that can be removed by pounding or by polishing as with sandpaper.  This inner husk layer has a lot of protein and other good things in it and keeps one healthy. Polished rice has lost much of the goodness that makes rice nearly a whole food (a food that can sustain humans pretty much on its own).  According to Avieli, polished rice is preferable in Viet Nam because unpolished rice is thought of as peasant or animal food.

Apparently in Viet Nam, rice is also the main element of a meal.  What is more is that It has central presence. Avieli argues that this is similar in Chinese meals. I disagree with the notion that rice is the central element in all Chinese food.  Chinese Food is quite diverse. Hong Kong, which most dominantly expresses a Cantonese-Chinese food culture, though this is hybridised significantly, places less of a central focus on rice. Sure there is rice in some form at meals, in rice form or as noodles or rice flour or as congee, it is a background or base to the main food. If you eat family style, at a Dai Pai Dong (a street restaurant), you most certainly will have a small bowl of rice that acts as a sort of mechanism for keeping the sauce with the main food elements that you are eating, though not all dishes need rice or noodles to be eaten along side.  Drunken Chicken, Greasy Pidgeon, Fried Tofu, and Char Siu Pork don’t, for example.  Indeed at multi-course banquets, where several small dishes are served one after the other in courses, the rice dish comes toward the end of the meal as a way to ensure that all guests have enough to eat. Usually it is served with a vegetable.  In fact, at the banquets I have attended, the most expensive or flashy dishes are served first and the less expensive and more mundane are served later. You eat these early courses without rice. This sequencing ensures that banquet practice, which involves mingling with the other tables and toasting toward the end of the meal, and hosting culture, which dictates that there is always food leftover, do not conspire to create waste out of expensive food items. Instead of being central to the meal that is consumed, the rice dish is sacrificed.  As such, rice still matters, but in ways that are different than we might expect. 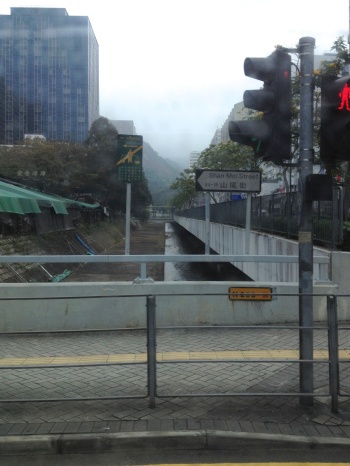 Shing Mun River and Fo Tan, where rice for Emperor was once cultivated.

Despite its role within the meal, this is not to say rice is not important (estimates are that per capita consumption is approximately 50kg per person per year in the SAR). Nor is it to say that rice has not had a very important role to play in shaping how the food system works in Hong Kong. Indeed, the provisioning of rice has had a special position in the history of Hong Kong, even since it was considered a barren rock and certainly before it became a British colony.  In the Tolo Valley, beyond Lion Rock in the New Territories, before the high rises of the new towns took root, the banks of the Shing Mun River were rice paddies. According to the SAR government, people farmed rice in this area from the time of the Ming Dynasty until the 1970’s when the new towns were built and the river was turned into a channel.  This rice, it was said, was the best in China and was taken to Beijing for the Emperor’s table. Now no rice is grown commercially in Hong Kong. Instead, it is imported from elsewhere.

Durring and then after World War 2, there were shortages of rice in Hong Kong, which inspired legislation that in 1955 defined it as a reserve commodity. This legislation set a quota for an amount of rice to be held in reserve in case of shortage.  Initially this reserve was about 45,000 tons. In 1997 this limit was reduced to 40,000 tons and in 1999 a trade liberalisation review decided to incrementally reduce reserves to 19,000 tons by 2001, which they estimated was a 19-day supply. The reduction in reserves has continued and currently there are 12,300 tons of rice in reserve.   Rice, however, remains the only reserve commodity for the SAR, though baby milk formula has been proposed to be such a commodity recently.

Reserve status also has historically meant that the import and export of rice was regulated heavily.  Individuals could bring rice into Hong Kong for personal use, but only licensed companies could move large amounts of rice in or through the SAR. Those able to apply for a licence could only import or export rice, but not both. Moreover, to hold a licence one had to be a resident of Hong Kong and have certain capital and financial reserves.  The licensing, of course, limits who and how rice can be distributed to households as well. When rice was licensed, it was sold in small shops as it was rice sellers who kept the reserves, not the government. The licensing limitations were lifted in 2003. Now anyone can import or export rice. A byproduct of this liberalisation of rice trade is the ability for supermarkets to use their own supply linkages to stock rice in their shops.  The small rice sellers have all but disappeared from the food landscape. This is also an indirect threat on the wet market system as one-stop shopping in supermarkets is made more possible when rice is also available in these outlets.

For a brief description of Food Culture in Hong Kong, the HK Heritage Museum offers a  summary, which can be downloaded here.

For more on the history of Shatin, including information on rice farming, see this information from the Planning Department here.

For more on the baby milk formula controversy and the moves to reserve is see this article in the SCMP.