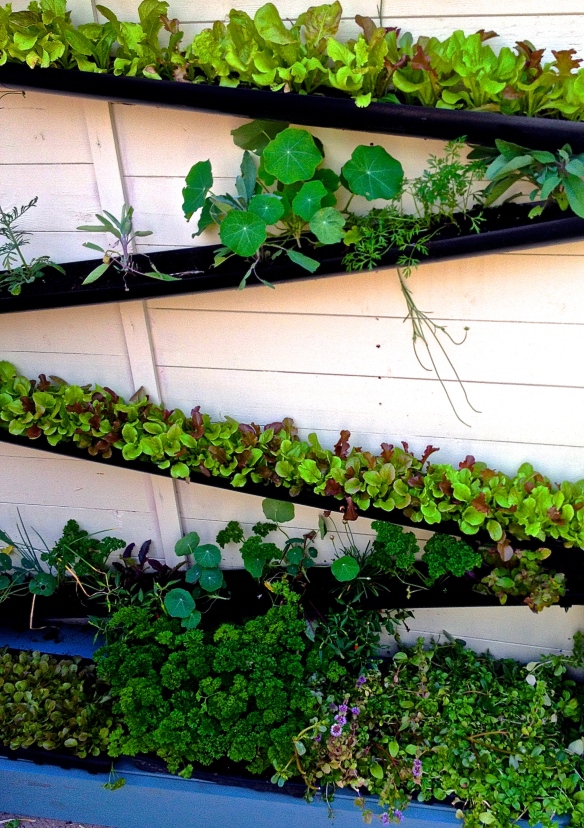 At the moment the Sheffield Food Festival is happening.  Over the course of the weekend, in the town centre, there are stalls of folk selling the foods they grow, make, deliver, and cook.  Given the weather has been wonderful, it makes for a very nice day out.  This being England, along with purchasing your food items to take home, you can also buy a nice bit of something to eat, a drink to get a bit happy with, and find out more about urban gardening (the last of which is what this post is really about).

In the centre of the festival, in front of the Sheffield town hall is an area that the festival organisers have tagged as the Allotment. An allotment is a bit of land that is suitable for growing fruit and vegetables sufficient to feed a family.   While allotments have been around for a long time, according the the National Allotment Society, allotments came into their own as part of the reformist effort. Given over (rented actually) to the urban poor who lived in high density housing with little associated garden space, the idea was that these families could grow their own food and thereby have an more healthy and varied diet.  In 1908 the UK passed the Small Holdings and Allotments act, which began the process to make allotment availability a statutory requirement for urban councils.  The act required councils to provide allotment space to meet the demands of residents (there is some ambiguity in terms of what is meant by sufficient and demand). To some degree, these laws came about after the government realised that the poor needed infrastructures and opportunities to produce their own food.  And this realisation came when the British army discovered that many men conscripted to fight in colonial wars (such as in Egypt) were malnourished as a result of poor diets and an inefficient urban food system.

In the war years, allotments served an important role in providing sufficient food for the residents of the UK.  As early as the 1800, the UK experienced a high degree of dependence upon food imports to meet its needs (see this report from DEFRA).  The precariousness that results from the inability to support the population through domestic food supplies became particularly acute in WW2 when war in Europe cut food supply chains to the UK and rationing had to be introduced (which incidentally lasted into the 1950’s–sugar was the last item to be taken off rationing).  Slogans like “Dig for Victory” were used to encourage people to grow their own food in whatever spaces they could find.

After WW2, the UK began a slide back into ever greater food import dependence, which coincided with a decline in the takeup of allotment spaces.  By 1957, government funding of allotments was withdrawn and indeed the notion of reserving prime development space as allotment became viewed as a waste.  Harry Thorpe, the author of the Thorp report written in the late 1960’s, is a figure similar to but less well know than Beaching (who advocated the pruning of the UK rail system).  In an analysis of land use given over to allotments, Thorpe argued that many were agricultural slums (see this paper by Acton for more).  Thorpe also argued that the notion of an allotment should be reconfigured from a way for the poor to augment their diets to a way for the middle classes, or at least those who aspire to be middle class, to expend their leisure time in the great British pursuit of gardening.  Now just a leisure activity, allotment gardening was something done by the few and, correspondingly the number of available allotments dropped from over 1 million in the inter-war period to just under half a million by 1977 to just a quarter of a million spaces by 1997.

Concurrent with the loss of allotment space has come an increase in dependence upon foreign food imports into the UK. Despite being an agricultural landscape, by 2007, food imports into the UK accounted for 40% of total food supply (see Global Food Security).  In urban spaces allotments spaces are a premium and nationally the waiting list is around 95,000.  With a missmatch between demand and supply, not to mention that there is a degree of inconvenience associated with having to go to an allotment to do ones gardening, people are turning to other spaces for growing food.

Indeed, the notion of a single use plot of land has been challenged world wide. Because a space houses a factory or other building site does not mean it cannot also be a farm. New York City is the home of one of the largest rooftop farms, Gotham Greens, is a commercial farm providing food to the Whole Foods supermarket chain (see the popupcity web site for links to this and other urban rooftop farms). But as was being demonstrated at the Sheffield Food Festival today in the allotment area, anyone can turn a small space of land–horizontal or vertical–into a place in which to grow food.  What is more, the infrastructures used need not be high tec.  Rain guttering can be fixed to walls, such as in the photo above, or old industrial pallets can be converted with a bit of recycled plastic fabric to hold your veg plants.

This encouragement for people to use what spaces are available is not intended to relieve county and urban councils from the responsibility of providing growing space to urban residents. There will always be those whose dwellings that are configured such that even access to the smallest windowsill or balcony will not provide a suitable space for growing food.  Instead, it is a plea to encourage people to think laterally (or vertically) about what is possible as a growing space and to take advantage of it.  Sometimes, building or health and safety or other regulations and everyday practices limit people’s access to those urban spaces that would be possible sites of small scale farming.  As a result this is also a plea for all to see that there are possibilities for making more of this earth and to encourage a lobbying for and a rethinking of how we use the spaces we inhabit. If we can do so, the pressures of food insecurity can be alleviated to some measure.

This post is part of the WordPress weekly photo challenge. The theme this week is from lines to patterns.  You can find the challenge here.

9 thoughts on “Urban food: Lines of opportunity into patterns of possiblity”