In the center of Mong Kok is what appears to be an old, run-down market; its single-story stature at odds with the high-rise buildings that surround it.  If you wander past by day you might think that the market is just hanging on as only a few sellers on the periphery will be open and selling fruits.  A meander through might also leave you thinking this is largely an abandoned space, and yet it beckons.

When passing through internal alley-ways with shuttered shop spaces you will begin to notice that all is not as it seems.  For you see, Ya Ma Tei Market is a night space.  Its peek time is between midnight and the early hours of the morning. 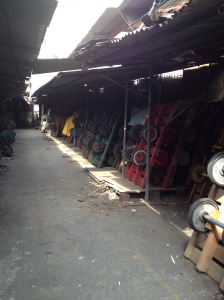 This tired, but compelling, place is one of the wholesale markets for the city. This is where the fruits that appear in the wet markets and on the streets as the wares of fruit hawkers in Kowloon and the New Territories comes first on its way into Hong Kong.

Although fruits like lychee, bananas, mango, avocado, and papaya can be gown in the SAR, and indeed can be found in gardens, on verandas and balconies, and even in the wild parts of Hong Kong, most of the fruit that is sold on the streets is imported.  In fact, of the over 500,000 tons of fresh fruit imported into Hong Kong each year, approximately 32% comes from the United States, which also has the greatest share of fruit imports.  Of course fruits like Jackfruit (pictured below) come from Tailand, which is also a major supplier to the SAR. Thus the market is an important site connecting east and west through the production, distribution, and consumption of fruit.

Part of the reason the market looks like it does is because it has been recognised as a place of historic importance and is a Grade 2 listed building (granted 2009).  This preservation, an ironic term given that it is a fruit market, is fortunate for the tourist viewing this landscape as the image presented is one that might have been seen when Hong Kong was still a British colony. The converse, of course, is that this presents problems for those who must work in this space as the fabric of the building complex is supposed remain as it is (though developers do and are able to challenge this designation).  My students who explored the market found that sellers struggled with the old infrastructure and the lack of modern conveniences such as air conditioning. Transport into and around the market is difficult given that it was build before motorised vehicles where the norm.  Indeed, if you look at the market from above it appears as a fire hazard.

The hodge-podge of tin, wood pallets, tarpaulins, and other building materials that make up the roof of this old complex.

The building itself, is not the only hindrance to the future prosperity of the market.  With the advent of supermarketization in the SAR, the wholesale market has seen a decline in trade.  Since 2000, the size and number of supermarkets has increased steadily in the SAR, though they are largely owned by just two corporations. While many people still buy their fresh food from the wet markets and street hawkers, there have been steady incursions by these supermarket chains to capture the stomach share of Hong Kong. While originally the main supermarket chains in the region focused on serving the expatriate community, since 2000 they have more effectively sought to engage with the local culture by introducing elements into their stores that resemble what a consumer might find in the market (red lights over the food, fresh fish tanks, workers to help select and weigh particularly the more traditional Chinese vegetables, tanks of tofu, and so forth), while at the same time capitalising on the reputation for greater cleanliness and higher food safety that what is attributed to small scale sellers.  Supermarketization also means that the stores have their own supply and distribution networks and the wholesalers are left out of the loop.

In the daytime, the market is an odd place of calm, offering opportunities to glimpse the human scale of this busy, noisy, and often oversized city.  If you are adventurous and walk into the market you will find pockets of community.  Men playing Mahjong, cats and people resting, a group drinking tea, all activities that come to make this place what it is now, but which also offer bittersweet glimpses into a future that is uncertain and likely to be disappearing.  How long before the market activity is made redundant, and how long before it is refurbished and redeveloped into something else?

A game waiting for the workers to return.

If you are interested in the origin of foods imported to Hong Kong by country there is a report from the Food and Environmental Hygiene Department web site available here that was published in March 2011 in the wake of the Japanese tsunami and nuclear disaster.

A full listing of historic buildings and places in Hong Kong is available here.

The students who took my Geog3414: Cultures, Social Justice and Urban Space course at HKU in the Autumn of 2012 chose the market as one of their Unique Hong Kong places.  You can see what they thought of the market here.