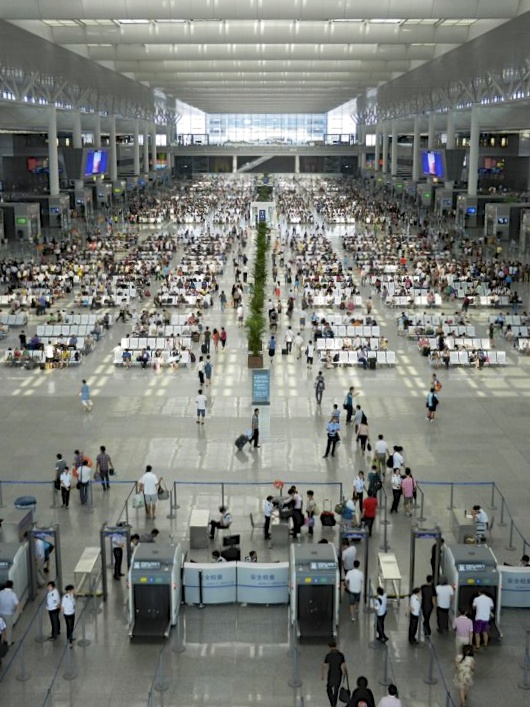 The High Speed Rail network in China is a modern masterpiece of engineering and implementation and had a budget of about US$262 billion (£170 billion). Trains travel at speeds in excess of 300 km and hour and in doing so shrink the vastness of China.  What can take 12 or more hours on a regular train service, now just takes a few hours and has the potential to move millions of people around the country, thereby reducing the difficulties of travel during golden weeks experienced by so many.  Yet, this rail service, paid for and pushed through by the Chinese government does not ease the travel problems of many migrant workers.

High speed rail in China is intended to link cities across the nation efficiently. The advantages of rail travel over air are multiple and include environmental benefits and ease of access to city centres afforded by the ability to link train stations to existing ground transport networks and the ability to tunnel into centrally located urban space.  It is, for example, estimated that once completed (2015) the time to travel between Hong Kong and Beijing will take about 8 hours, while the current fast trains take 24 hours.  What will make the HSR trains competitive with air travel is waiting time at the train station will be shorter than what is required for an international flight leaving Hong Kong, the train terminus will be located in Tsim Sha Tsui at Austin Station, which sits at the foot of the ICC building (currently the 5th tallest building in the world) and not out in the urban periphery some half hour away from the city centre, and there are no luggage carousels to contend with. So what you get pretty much with the train is just the journey time plus a little bit, while 3 hours of flight time rapidly balloons into an all day journey.  The HSR system will certainly bring greater convenience, but only to those who can afford it.

The building site for the future HSR link to Hong Kong

Speed and distance are clearly more accessible to the wealthy than to the poor.  I once asked my students in a university top-up English course about their holidays, only to learn that most had never been beyond the borders of Hong Kong and had never been on holiday.  For them a holiday was a day trip into one of the city’s Country Parks at the weekend for a few hours when they have a day off from school. Indeed, a day off, is something that is unusual for many (there is currently some discussion in Hong Kong about reviewing statutory working hours and a committee has been established). Of course, those who are self employed work everyday, as I discovered from talking to workers in Lo Wu Commercial city, just across the border in Shenzhen.  I learned that the shop workers work seven days a week from ten or eleven in the morning until sometime between seven and eight in the evening.  The lost earnings far outweigh the need, in their minds, for a rest day and the idea of a holiday is completely foreign. These Shenzhen workers, like my students and their families, could not afford the time cost of travel–fast or otherwise.

This is not to say that the workers in Shenzhen (and elsewhere in China) do not travel. They do, in mass, once a year around the Lunar New Year (there is a second Golden Week around the Mid Autumn Festival).  In China everything closes over the Lunar New Year and migrant workers travel back to their homes to visit their school aged children and elder family members, who often must remain in the rural places because of the Hukou system (the Companions post on GeoFoodie talks a bit more about Hukou). Many migrant workers live thousands of miles from their families. It is estimated that more than 200 million (200,000,000) people travel via the railways in this period. Most are not traveling by high speed rail.  Instead they will travel many hours in slow trains to reach their destinations.   As this Time magazine article points out, the infrastructure improvements of the High Speed Network bypass many of those who could benefit from using it because of the cost of a ticket and the need to book online.

Submitted as part of the WordPress Weekly Photo Challenge, the photograph above was taken in the HSR station in Shanghai in 2011 just days after a HSR train crashed in Wenzhou and killed 40 people. Investigations eventually uncovered corruption that ultimately led to the arrest, trial and conviction of Liu Zhijun, the minister who was once credited as being the driving force behind modernising the railway in China (see this Guardian article). The theme of the photo challenge is masterpiece. You can find it here.

24 thoughts on “A modern Chinese masterpiece?”